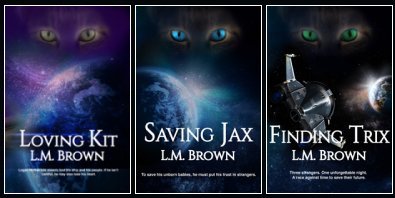 My MPreg titles are all stand alone titles set in the same universe.

You can learn more about that universe over at the Felines of Furyne website.

Or, you can just dive into one of the stories.

Warning: These stories contain vaginas as well as cocks.

By way of explanation, some of the feline humanoid aliens in these stories are born with fully functioning male and female sex organs, which enables them to carry babies. The dual-gendered characters who feature as main characters in my stories have a dominant gender of male and are sexually attracted to other males. If you read all the stories, you will meet others who differ. Some are female dominant, some are attracted to the opposite sex, etc.

These aliens are therefore a form of intersex characters and they engage in sexual acts involving both their male and female parts.

If you are offended by intersex characters and/or any part of their genitalia, this series is not for you.