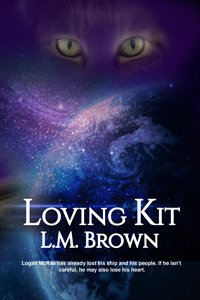 Logan McRae has already lost his ship and his people. If he isn’t careful, he may also lose his heart.

Logan McRae never expected to see two aliens when he woke from cryogenic sleep. He has lost his ship and his people and he questions whether he has lost his mind. As he gets to know Halor and Kit he realises he might just lose his heart as well.

Logan expected to wake on the spacecraft Mercury, ready to pilot the ship down to New Earth. Instead he comes out of cryogenic stasis to find he is on another ship with two alien beings, neither of whom can understand anything he says. Unfortunately, they are all the help he has if he wants to find his people and resume his journey.

Kit doesn’t know what sort of creature he has accidentally purchased, but it is definitely male and isn’t so very different from him and his lover, Halor. The language barrier might be a problem, but Kit knows the language of love doesn’t always need words.

Prince Halor of the Hawk Clan has always been reluctant to expand his nest beyond himself and Kit, but it is obvious from the start that his feline lover is attracted to their unexpected guest. Halor will do anything to give Kit the happiness he deserves, even invite another man into their bed.

Logan has no idea that Kit isn’t quite like other men until their passion results in unexpected consequences. Now he must choose between his mission and the two men who have given him everything he ever wanted, as well as things he never dreamed of.

For a fun experiment, I have set up a new site and blog as a tie in to this book (and the series it seems to be spawning – so much for a standalone story!)  The site is a fictional one with lots of tidbits of information about the felines, their various neighbours and the humans who are setting up their new colony on Furyne.

You can visit the site here.

“I have FINALLY found a fantastic, awesome, sweet, vivid, terrific, smoking hot, totally believable, and absolutely fascinating tale that had me hooked from beginning to end. LM Brown takes the alien MPREG trope, kicks it up a hundred notches, and then gives it her own uniquely original twist. All I can say is THANK YOU!!!!” – Patricia @ Amazon