Posted on July 5, 2018 | Comments Off on My Crunchy Life by Mia Kerick Blog Tour

John Lennon fought for world peace, but sixteen-year-old hippie hopeful Kale Oswald’s only made it as far as tie-dying his T-shirts with organic grape juice. Now he’s ready to cement his new hippie identity by joining a local human rights organization, but he doesn’t fit in as well as he’d hoped.

After landing himself in the hospital by washing down a Ziploc bag of pills with a bottle of Gatorade, Julian Mendez came clean to his mother: he is a girl stuck in a boy’s body. Puberty blockers have stopped the maturing of the body he feels has betrayed him. They’re also supposed to give him time to be sure he wants to make a more permanent decision, but he’s already Julia in his heart. What he’s not sure he’s ready to face is the post-transition name-calling and bathroom wars awaiting him at school.

When Kale and Julian come face-to-face at the human rights organization, attraction, teenage awkwardness, and reluctant empathy collide. They are forced to examine who they are and who they want to become. But until Kale can come to terms with his confusion about his own sexuality and Julian can be honest with Kale, they cannot move forward in friendship, or anything more.

Find My Crunchy Life at Goodreads 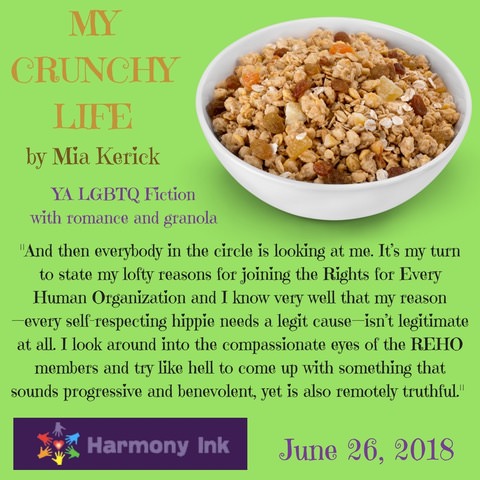 On my first day back to school after the incident, Sydney Harper, a junior from the right side of the tracks, cut me off in the hallway by the gym and got up in my face. “You didn’t really wanna die. My mother said it was just some kind of pathetic cry for help.” Having made her point, she spun around on her Ugg-booted nonheel and headed for the girls’ locker room.

Then in precalc, some guy I barely knew poked me hard in the back with a Sharpie marker, and I was the lucky recipient of another dose of compassion. “You just crave attention, don’t you, girly-boy?”

Maybe, on some level, they were both right.

But on that night in October when I decided my best move in life would be to wash down the last of the Extra Strength Tylenol in our medicine cabinet with a bottle of Citrus Cooler Gatorade, I knew I couldn’t lose, however it turned out. The alternative to my clever plan to get some attention, and maybe even a measure of help, was that I’d fall asleep and never wake up— which, in my opinion, served just fine as Plan B.

If nobody heard my “cry for help” and I checked out, we’d probably all be better off. No real harm done… except to Mama. But the freaking UPS man heard my “pathetic cry,” or more accurately saw my apparently lifeless torso hanging from the tree house in the side yard, and saved me. 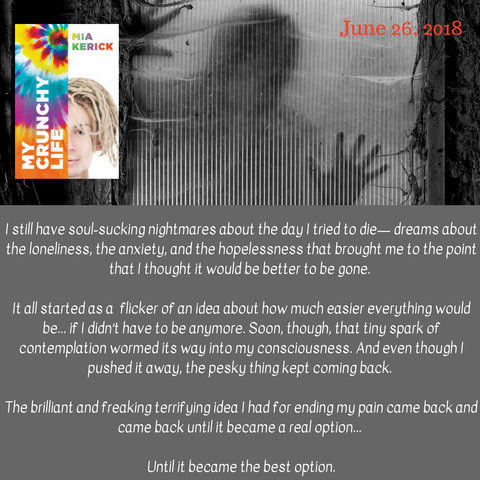 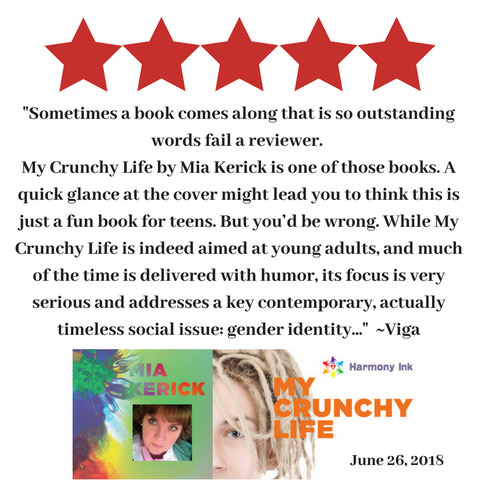 Mia Kerick is the mother of four exceptional children—a daughter in law school, another in dance school, a third studying at Mia’s alma mater, Boston College, and her lone son still in high school. She writes LGBTQ romance when not editing National Honor Society essays, offering opinions on college and law school applications, helping to create dance bios, and reviewing English papers. Her husband of twenty-four years has been told by many that he has the patience of Job, but don’t ask Mia about this, as it is a sensitive subject.

Mia focuses her stories on emotional growth in turbulent relationships. As she has a great affinity for the tortured hero, there is, at minimum, one in each book. As a teen, Mia filled spiral-bound notebooks with tales of said tortured heroes (most of whom happened to strongly resemble lead vocalists of 1980s big-hair bands) and stuffed them under her mattress for safekeeping. She is thankful to Dreamspinner Press and Harmony Ink Press for providing alternate places to stash her stories.

Her books have won a Best YA Lesbian Rainbow Award, a Reader Views’ Book by Book Publicity Literary Award, the Jack Eadon Award for Best Book in Contemporary Drama, an Indie Fab Award, and a Royal Dragonfly Award for Cultural Diversity, among other awards.

Mia is a Progressive, a little bit too obsessed by politics, and cheers for each and every victory in the name of human rights. Her only major regret: never having taken typing or computer class in school, destining her to a life consumed with two-fingered pecking and constant prayer to the Gods of Technology.

Contact Mia at miakerick@gmail.com. Visit her website for updates on what is going on in Mia’s world, rants, music, parties, and pictures, and maybe even a little bit of inspiration.

Comments Off on My Crunchy Life by Mia Kerick Blog Tour