Since my blog seems to have turned into guest posts and my already scheduled A-Z posts, I thought I better post something that isn’t one of those for once.

Not much news to share I’m afraid, but let’s start off with some good news on the book review front.

Shifting Currents came out earlier this year and I’m afraid the reviews have been a little lacking.  The only one I had seen before this week was not exactly great – apparently there was too much plot for the reviewer who is thinking about giving up on the series.  When the weeks and months started to pass with no more, I was beginning to think the rest of the usual reviewers had already done that.

Thankfully, an email from my publisher today gave me the heads up on a new review that is much better and by a reviewer who likes that the story has a plot to it.

“Intense, mysterious, suspenseful and plenty of action. That is how I would describe this story as it has many things unfolding as it progresses. I am very much so looking forward to the next book to see what else happens.

You can read the full 5 hearts review at MM Good Book Reviews.  Thank you Shorty!

And to answer the question about why the Atlanteans were banished… nah, I think that will remain a secret for a while longer.  It is, after all, a major part of the plot of book six, which is likely to be my NaNoWriMo project in November this year.

Speaking of NaNoWriMo, I decided to forego the July Camp this year.  I am hoping to finish off some projects this month rather than starting something new. One of those projects, after all, is Hidden Depths, book five of the Mermen & Magic series, that was my July NaNo project last year!

That isn’t to say that I haven’t been busy writing and since cutting back on the social media drama I have been getting a lot more done in that regard. 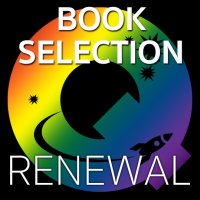 One thing I did manage to get done, at the very last minute, was an entry to this years QSF Flash Fiction call and, by some miracle, it was accepted by the judges for inclusion in the anthology.  So you can look out for that coming up later in the year even if nothing else actually gets published.  My story in the collection is called Upgrades.

Other projects that I should be getting sent off to various parties and in some cases finishing off are listed below with the current status.

A futuristic light-hearted story. The story itself is finished but I hate the title, partly because it is a word that always gets underlined in red as a spelling error, which annoys me. So I have been avoiding sending it to an editor to get it ready for self publishing.  Hopefully when I decide on a title (or give up and resign myself to having a title that looks like a spelling error) it will be sorted fairly quickly as it is under 20,000 words.

I would share the blurb here, but apparently I haven’t written one yet. I can’t imagine why since I just LOVE writing those.  And yes, that is me being sarcastic. I don’t mind them for novels, but for short stories I do struggle not to give away the entire plot in the blurb.

Another futuristic that was supposed to be about 30,000 words and ending up topping 80,000 instead.  This is a MMM Futuristic MPreg story that got way out of hand.  I had hoped to get it sent to Fireborn before now, but because of the length it has been delayed a little. This story is also finished.

The (VERY ROUGH AND UNEDITED) Blurb for this one…

Logan McRae has already lost his ship and his people. If he isn’t careful, he may also lose his heart.

Logan expected to wake on the spacecraft Mercury, ready to pilot the ship down to New Earth. Instead he comes out of cryogenic stasis to find he is on another ship with two alien beings, neither of which can understand anything he says. Unfortunately, they are all the help he has if he wants to find his people and resume his journey.

Kit doesn’t know what sort of creature he has accidentally purchased, but it is definitely male and isn’t so very different from him and his lover, Halor. The language barrier might be a problem, but Kit knows the language of love doesn’t always need words.

Prince Halor of the Hawk Clan has always been reluctant to expand his nest beyond himself and Kit, but it is obvious from the start that Kit is attracted to their unexpected guest. Halor will do anything to give Kit the happiness he deserves, even invite another man into their bed.

Logan has no idea that Kit isn’t quite like other men until their passion results in unexpected consequences. Now he must choose between his mission and the two men who have given him everything he ever wanted, as well as things he never dreamed of.

Long time readers (do I have any of those?) will remember that this one was published by The Publisher Who Must Not Be Named and has been out of print since.  The reason this has stayed out of print is because I wanted to extend it a little before it was re-released.  It was somewhere around 12,000 – 15,000 words if I recall correctly.  The extended version hit 45,000 words this week, but is nearing completion – I hope!  This will be another one for Fireborn, who have not been getting enough from me.

As mentioned above, this one is mostly written. Just a few scenes that have been lingering since last summer.  I put it aside when edits hit and never got back to it for one reason or another.  This is another reason the first two projects on this list have not gone anywhere yet.  I want to get this finished before anything goes anywhere.  I am not having edits send me off track again. Obviously, like all the Mermen books, this one is a full length novel.

To Change the Stars

The sequel to To See the Sky is another nearly done project that I need to just finish off.  This is Jessiah’s story which I have been promising to finish for way too long.  It is so long ago since I was looking at this one I can’t even remember how much I need to write to finish it. I think it is mostly done but there are certain scenes that I may have dreamed I wrote but never actually did.  Writers will know how often that happens to all of us.  It is a long novella/short novel.

These last two will, of course, be going to Pride Publishing, who have the earlier stories in the series.

Once these projects are finished (end of August at the latest I hope), I will start sending things out where they need to go.  And, while waiting on those, I am hopefully going to get back to the final Fairy Tales for All story, Magic & Mirrors, which is long overdue for completion and the half written project that needs the most work.

So, there you have it.  Despite evidence to the contrary, I have not been spending all my time on the sun lounger with my Kindle.   Realistically, most of those, if not all, won’t be out this year, but it means there will be a lot to look forward to in 2018… providing my publishers want them, of course.

Hopefully next time I am updating my blog with news, it will include the good news that a contract has been signed and things are finally leaving my hard drive and making their way out into the world.